Chairman McColley, Vice chair Thompson, Ranking Minority Member Antonio and members of the Senate Transportation, Commerce and Workforce Committee, thank you for the opportunity to submit written testimony today. My name is Tim Burga and I am the President of the Ohio American Federation of Labor and Congress of Industrial Organizations (Ohio AFL-CIO). The State Federation represents over 500,000 organized workers in nearly all sectors of employment. From making steel to baking bread, building our schools and teaching our children, keeping us safe and delivering the goods Ohio’s union members are doing the work that connects us all. I write to you today on behalf of our union members and Ohio’s working families in opposition to Senate Resolution 376, which urges Congress to adopt the trade agreement between the United States, Mexico and Canada, also known as USMCA or NAFTA 2.0.

NAFTA and subsequent trade deals have been a disaster for the U.S. manufacturing sector and as a result our local communities. According to the Economic Policy Institute, Ohio has lost approximately 106,000 blue-collar jobs because of NAFTA, as manufacturing plants closed and relocated to Mexico. That’s because NAFTA was written to enrich corporations, providing a massive windfall for big-business at the expense of working people and the communities where we live and raise our families. To make matters worse, it soon became the template for other anti-worker trade agreements, perpetuating a vicious cycle of multinational corporations outsourcing jobs to low-wage, low-standard regions and destroying the livelihoods of working families in the process.

After a quarter-century of this race to the bottom, working people are fed up and demand a better way forward. We are hungry for a North American trade deal that lifts wages and improves livelihoods. But make no mistake: The deal the Trump administration is pushing on Congress falls short of what we need and deserve.

President Obhof claimed in his testimony that this trade agreement will be different because the USMCA’s “enforceable labor standards will enable the American worker to compete on a level playing field, while improving wages and labor standards among our trading partners.” One of the standards that proponents hold up as an example is a requirement that at least 40 percent of vehicles made in Mexico must be assembled by workers “making at least $16 an hour.” As written, the deal allows any party to block an enforcement proceeding by refusing to appoint

arbitrators to a dispute panel. And the $16 wage rule is an average, not a floor, so it includes engineers and other highly paid white-collar workers. This flaw would allow Mexican auto factories to continue to pay the vast majority of workers poverty wages.

To win working peoples support, the treaty needs robust enforcement mechanisms not currently in the plan. Without the necessary enforcement provisions, the American worker will have little faith that Mexico can or will keep up its end of the bargain to establish a Department of Labor, implement and enforce long-overdue labor reforms, allow workers to form real unions and negotiate better wages and working conditions. While the Mexican government has taken steps in the right direction, this proposal has no way of ensuring that they continue following through on their promises.

This deal needs to mandate transparent reporting and strong, guaranteed consequences for violations. With working people in Mexico currently facing wages as low as $2 per hour or less, we cannot accept a deal that doesn’t have the enforcement tools to raise standards for working people in all three NAFTA countries.

Under the proposed deal, any party can unilaterally shut down a settlement panel investigating trade violations. That’s akin to giving an accused thief the right to shut down his own trial. Negotiators had gotten rid of this loophole in recent trade agreements, so to turn back now would be another unacceptable concession to multinational corporations. If a trade deal cannot be enforced, then it’s not a deal at all.

Finally, the administration needs to rein in pharmaceutical corporations’ monopoly over prescription drug prices. The new USCMA would lock in exorbitant prices for life-saving medicines for a decade — a massive giveaway to the pharmaceutical industry and a blow to working families and consumers. These are the most egregious issues, but there is a range of other problems with the current proposal that also needs addressed, from allowing corporations to hide the origins of our food to leaving high-wage jobs vulnerable to continued outsourcing.

While I am glad that this much needed debate is happening right here in Ohio, Senate Resolution 376 falls short of what Ohioans need from our state Senate on this matter. This body should be urging Congress to correct the issues outlined above before bringing the USMCA up for a vote. For too long, Ohioans have suffered from lost jobs and lower wages because of so-called “free trade” deals that place the interests of multinational corporations over our workers. The USMCA as written is just more of the same failed policies. I urge this committee to vote NO on Senate Resolution 376 and instead ask Congress to change the USMCA so that it works for working families.

Thank you for taking the time to read my written testimony opposing SR 376. Please do not hesitate reaching out to my office with any questions. 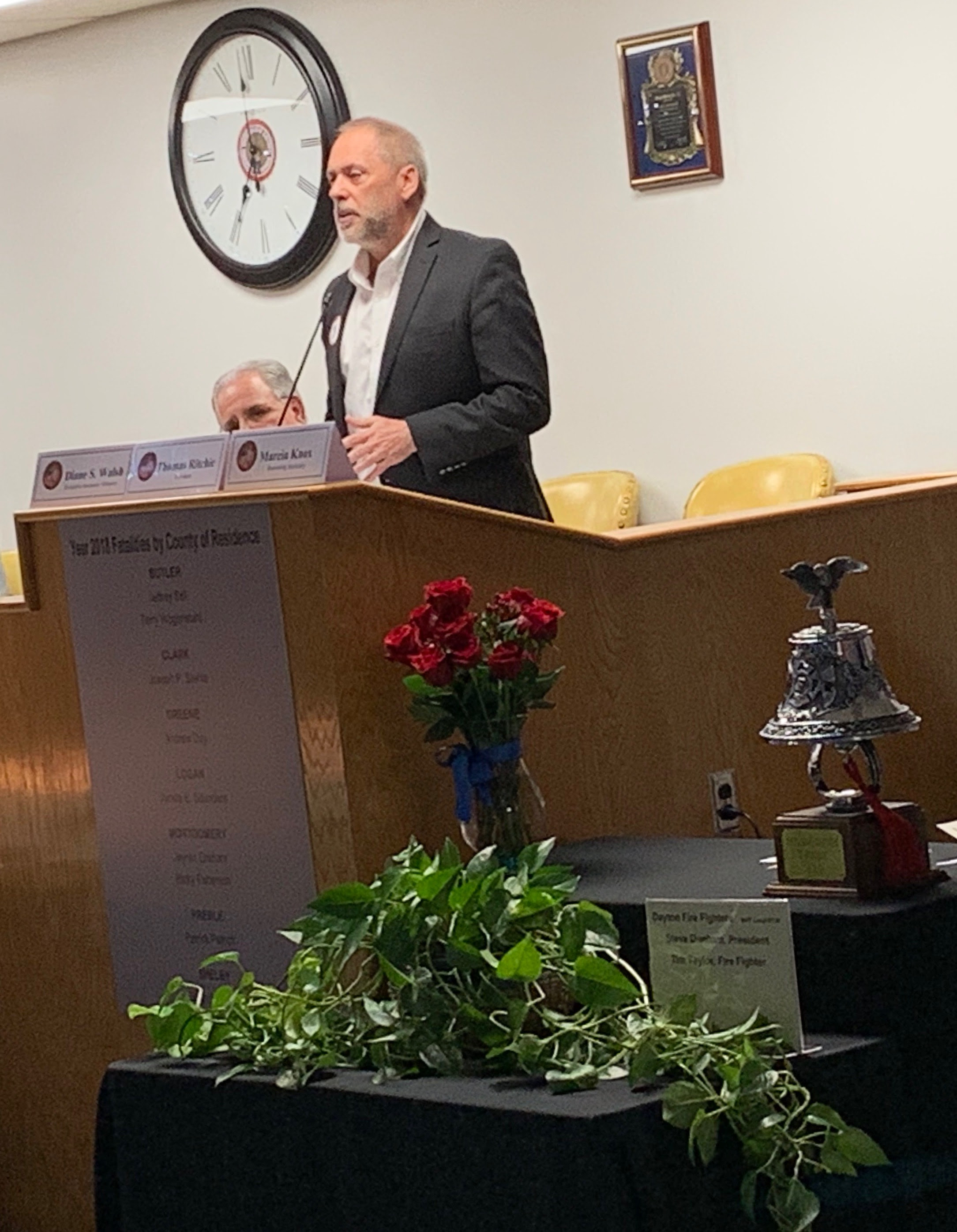 Yesterday, Republican appointees on the U.S. Supreme Court abandoned decades of common-sense precedent and issued a 5-4 opinion (Janus v. AFSCME Council 31) outlawing “fair share” fees in state and local government. The billionaires and corporate special interests that have manipulated our system of justice have succeeded in getting the highest court in the land to do their bidding.

Let me be perfectly clear, we have never depended on any politician or judge to decide our fate and we aren’t about to start now.

This decision comes just as public support for labor unions has risen to its highest level in years and workers are recommitting to unions with new organizing drives and growing ranks in important sectors of our economy right here in Ohio. In fact, just last year 262,000 more workers across the country organized and joined a union.

Until it is overturned, this decision will be a political stain on what is intended to be the most honorable, independent body in the world. But more importantly it will further empower the corporate elites in their efforts to thwart the aspirations of millions of working people standing together for a better life.

The labor movement, however, remains undeterred.

We applaud U.S. Senator Sherrod Brown who was quick to denounce the ruling saying, “The decision by this anti-worker Supreme Court is an attack on workers’ freedom to advocate for themselves.” Brown’s opponent however, Jim Renacci, made no excuses for being on the wrong side of workers by applauding the decision saying it is “a victory for the First Amendment.”

This case was part of a multipronged attack, being spearheaded this time by the National Right to Work Legal Defense Foundation, a front group funded by corporate billionaires, including the notorious Koch brothers. Taking away the freedom of working people to join together in union is the primary goal, and eliminating fair share fees for public employees is the latest tactic.

Richard Corday, Ohio AFL-CIO endorsed candidate for Governor, saw through the dark web of corporations and wealthy donors who want to take away the freedoms of working people by sharply criticizing the decision while adding, “Unions bring a collective voice for fairness in the workplace, which has helped create Ohio’s middle class.” Cordray’s opponent, Mike DeWine, was apparently in hiding and did not comment.

We have faced similar attacks in Ohio and ultimately prevailed.

Powered by our members and carried by the expressed support of a vast majority of Ohioans, labor unions will continue to fight to sustain our families, improve our workplaces and make our communities stronger regardless of the court’s ruling.

The Future of the VA is at Stake

Pending legislation on Capitol Hill could lead to a total dismantling and privatization of the health care system our veterans want and need.

We need you to pick up the phone and call your lawmaker at 833-480-1637 and tell them you strongly oppose to the VA MISSION Act (S. 2372), which is moving through Congress and could lead to the privatization of the VA.

The federal union, AFGE, has proposed 7 changes that would protect the future of the VA health care system – including keeping essential primary care services within the VA. Yet none of these changes were made in Congress. Every dollar spent on privatized care deprives our veterans of the specialized care offered in our VAs – specialized care that saves their lives and helps veterans heal faster.

We need you to pick up the phone and call your lawmaker at 833-480-1637 and tell them you strongly oppose the VA MISSION Act (S. 2372), which is moving through Congress and could lead to the privatization of the VA.